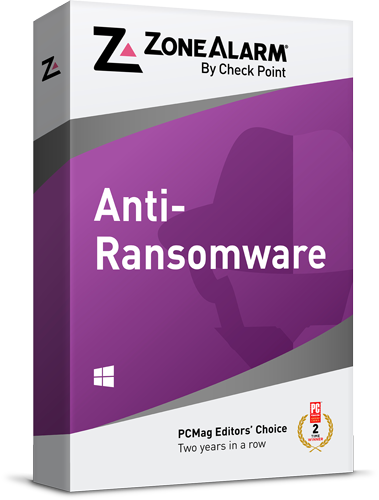 Protect your PC with the most advanced technology to keep hackers away from your data.

Ransomware is a type of malicious software that prevents the victims from accessing their documents, pictures, databases and other files by encrypting them and demanding a ransom to decrypt them back. A deadline is assigned for the ransom payment, and if the deadline passes, the ransom demand doubles or files are permanently locked. Ransomware is an ever-increasing threat worldwide, claiming a new victim every 10 seconds.

How We Protect You

The only anti-ransomware protection that immediately and automatically restores any encrypted files.

Detects and blocks Ransomware threats, even those that other PC security solutions don’t catch.

Blocks any malicious attempts to lock your PC and ensures you always have access to it.

One of the first modern Ransomware attacks was detected over a decade ago in Russia. It moved files on the attacked PC to a password-protected ZIP folder, and deleted the originals. To recover their files, victims had to transfer $300 to an E-Gold account that can be considered an early type of BitCoin.

While they generally rely on similar tactics to take advantage of users and hold your data hostage, there are different families of Ransomwares. The most common ones are:

Bad Rabbit - Russia and Ukraine first reported the ransomware attack, which follows a similar pattern to WannaCry and Petya by encrypting the user's file tables and then demands a Bitcoin payment to decrypt them. It was distributed via a fake Flash software installer, which allegedly arrives as a pop-up from a legitimate Russian news site. Once run, the pop-up leads to a compromised site, which in turn downloads an executable dropper.
Petya - The ransomware targets Microsoft Windows-based systems, infecting the master boot record to execute a payload that encrypts a hard drive's file system table and prevents Windows from booting. It subsequently demands that the user make a payment in Bitcoin in order to regain access to the system. There are several variants of Petya, including the one dubbed NotPetya.
WannaCry - Using an exploit vector named EternalBlue, which was leaked from the U.S. National Security Agency, the ransomware attack, unprecedented in scale, infected more than 230,000 computers by taking advantage of an unpatched Microsoft Windows vulnerability. It reached over 150 countries, using 20 different languages to demand money from users via Bitcoin cryptocurrency.
Locky - First seen arriving as a macro in a Word document, and then spotted being spread via Adobe Flash and Windows Kernel Exploits. Locky ransomware is known for deleting shadow copies of files to make local backups useless.
Cryptowall - Its latest version is known for encrypting also the names of the encrypted files making it harder for the victim to know what has been encrypted. It is spread in many ways such as attachments in phishing emails from financial institutions. The ransom demanded is usually $700, doubling after about a week to $1400.
Cerber - The world’s biggest ransomware-as-a-service scheme, it isis a franchise scheme, with its developer recruiting affiliates who spread the malware for a cut of the profits. Cerber was used in an attack that potentially exposed millions of Microsoft Office 365 users to the infection.

ZoneAlarm Anti-Ransomware is compatible with all other antivirus, firewall and PC security software.

Stay on Top of the Latest Security News

ZoneAlarm (A CheckPoint Company) website uses cookies to ensure you get the best experience.More info >
Got it, thanks